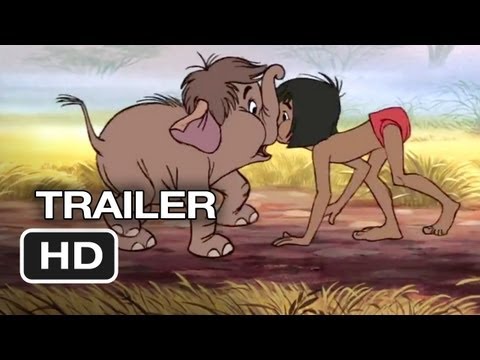 While they are not exact representations they should offer a general idea of overall video quality. Sound quality is excellent: the music sounds great, voice acting is clear, and there is no sign of damage or distortion. The surround mix can overdo it here and there, though. Thankfully this is rare and most of the dialogue and effects stick to the fronts.

We get more of the same here. The new material starts off with a minute video called Music, Memories, and Mowgli, a conversation between Richard M. A 9-minute storyboard reconstruction of an alternate ending found in an early story treatment is the next feature.

It ends in a similar manner to the film except Mowgli comes across a guard at a gate to a village. Yep, minutes. Disney yet again includes another karaoke feature, common for their Blu-rays now, this one called Bear-e-Oke natch! DisneyAnimation: Sparking Creativity is actually the only decent new supplement in the bunch. This 9-minute feature gives us another look at the animation department of the studio, focusing on their Spark program. The Spark program is where animators come up with new, innovative ideas and then share them with other animators and executives, and I assume being awarded or compensated if the idea is valid enough.

We get a sampling of two of the submissions: a new motion capture technique that was used for the effects in Frozen, and then a new look for computer animated films, which was used for the award winning short Paperman anybody else find it odd that in the last few years Disney themselves has been far more innovative and interesting than Pixar in computer animation? These are usually pretty good and informative, and this is no different, but you can basically follow these with a check list now: get rights to classic story.

Go through months, maybe years of story development. Get voices. Write music. Release film to public. Sometimes serious issues arise like with The Little Mermaid but the development of this film was fairly straightforward, except Disney was more involved with this one after the failure of The Sword in the Stone. Of course the one sad fact about the film is that Disney passed away before the film was anywhere near finished, never seeing a finished print.

Bagheera: Oh, yes, yes. Colonel Hathi. The Man-cub is with me. I'm taking him back to the Man Village. Hathi: To stay? Bagheera: You have the word of Bagheera. Hathi: Good. And remember, an elephant never forgets. I don't know what the army's coming to these days.

These young whippersnappers, who do they think they are? Hathi and the Jungle Patrol are marching] Bagheera: Stop! Wait a minute!

Hathi: Who said "Halt! I give the commands around here! Now, speak up! Who was it?! Bagheera: Oh, it was me, Colonel. Hathi: What do you mean, sir, taking over my command?

Highly irregular, you know! Hathi: Oh, impossible! We're on a cross-country march! Bagheera: This is an emergency, Colonel! The man-cub must be found! Hathi: Man-cub? What man-cub? Shere Khan: How interesting. Bagheera: The one I was taking to the Man Village! Hathi: Good, that's where he belongs. Now sir, if you don't mind, we'd like to get on with the march. Bagheera: No, no, you don't understand, Hathi!

Shere Khan: How delightful. Hathi: Well, it serves the whippersnapper right. Bagheera: But Shere Khan the Tiger! He's sure to pick up the man-cub's trail. Hathi: [laughs] Shere Khan?! Nonsense, old boy! Shere Khan isn't within miles from here! Fortunes of war and all that sort of thing, you know. Winifred: [storms towards Hathi, with Junior following her] This has gone far enough!

Far enough! Hathi: Winifred! What are you doing out of ranks? Winifred: Never mind! Hathi: Our son But Winifred, old girl, this is an entirely different matter! Winifred: Hmph! Hathi: Different, entirely. Winifred: That little boy is no different than our own son. Now you help find him, or I'm taking over command!

Hathi: WHAT?! A female leading my herd?! That's utterly preposterous! Junior: Pop, the man-cub and I are friends. He'll get hurt if we don't find him. Please, pop? Hathi: [softening up] Now, don't you worry, son. Your father had a plan in mind all the time. Winifred: [smiling sarcastically] Sure you did.

Kaa: Shere Khan. What a surprise. Shere Khan: Yes, isn't it? I just dropped by. Now, forgive me if I've interrupted anything. Kaa: Oh,no. Nothing at all. Shere Khan: I thought perhaps you were entertaining someone up there in your coils.

Kaa: Coils? Oh, no. I was just curling up for my siesta.

Shere Khan: But you were singing to someone. Kaa: [choking like mad] No I was just Shere Khan: Indeed? Kaa: Yes. You see, I have Shere Khan: What a pity. It's simply terrible. I can't eat. I can't sleep. So, I sing myself to sleep. You know, self-hypnosis? I have no time for that sort of nonsense. Kaa: Some other time, perhaps? Shere Khan: Perhaps. But at the moment, I'm searching for a Man-cub. Kaa: Man-cub? What Man-cub?

Shere Khan: The one who's lost. Now, where do you suppose he could be? Kaa: Search me. Now, I'm sure you wouldn't mind showing me your coils would you, Kaa? Kaa: Certainly not. Nothing in there. Alarmed, he starts snorting and coughs. Shere Khan: Hmm. And now, how about the middle? Kaa: The middle?

Oh, the middle. Well, if you do just happen to see the Man-cub, you will inform me first. Shere Khan: Good show. And now, I must continue my search for the helpless little lad. Poor, little, helpless boy You said I could trust you! Kaa: It's like you sssaid: you can't trusssst anyone! My poor sssacriliac. Bagheera: Now, now. I know how you feel. But remember, Mowgli: "Greater love hath no one than he who lays down his life for his friend.

You're all right! Sure, I am! Never felt Vultures: [laughing happily] Mowgli: [laughs] You sure had us worried. Baloo: Aw, I was just taking five.

Y'know, playin' it cool. Yeah, but he was too easy. Mowgli: Good old Papa Bear! Dizzy: It's going to be a bit dull without that little bloke, isn't it? Buzzie: Yeah. So what are we gonna do? Flaps: I dunno--Hey, now don't start that again!

Bagheera: And furthermore, Mowgli seems to have man's ability to get into trouble, and your influence hasn't been exactly-- Baloo: Shhh!

Keep it down, you're going to wake up little buddy. Well, he's had a big day, it was a real sockaroo. You know it ain't easy learning to be like me.

READ ALSO: CATHERINE THE GREAT PORTRAIT OF A WOMAN PDF

Bagheera: Pah! A disgraceful performance. Associating with those undesirable, scatterbrained apes. I hope he learned something from that experience. Mowgli: [sighs, singing in his sleep] Scooby-dooby, dooby-doo. Baloo: Ha, ha.

That's my boy. Bagheera: Oh, nonsense. Get over here. I'd like to have a word with you. Baloo: A word? You going to talk some more? Bagheera: Baloo, a Man-cub must go back to the Man Village. The jungle is not the place for him. Take a look at me.

Bagheera: Yes, just look at yourself. Look at that eye. It's beautiful, ain't it? Bagheera: Frankly, you're a disreputable sight. Baloo: Well, you don't look exactly like a basket of fruit yourself. Baloo: Why not? Bagheera: Uh How can I put it? You wouldn't marry a panther, would you? Baloo: I don't know. Bagheera: [flustered] Baloo, y-y-you've got to be serious about this-- Baloo: [seriously] Oh, stop worrying, Baggy. Stop worrying, I'll take care of him. Bagheera: Yes, like you did when the monkeys kidnapped him, huh?

Baloo: Can a guy make one mistake? Bagheera: Not in the jungle. And another thing: Sooner or later, Mowgli will meet Shere Khan. Baloo: [suddenly very shocked] The tiger? What's he got against the kid?

Bagheera: He hates man with a vengeance, you know that. Because he fears man's gun and man's fire. Baloo: But little Mowgli don't have those things.

Bagheera: Shere Khan won't wait until he does. He'll get Mowgli while he remains young and helpless.

Baloo: No! Well, well, what are we going to do? Bagheera: [seeing that Baloo is now just as worried about Mowgli as he is] We'll do what's best for the boy. Baloo: You better believe it, you name it now I'll do it. Bagheera: Good. Then make Mowgli go to the man-village. Baloo: [furiously] Are you outta your mind?! I promised him he could stay here in the jungle with me! Bagheera: That's just the point!

As long as he remains with you, he's in danger. So it's up to you. Baloo: Why me?! Bagheera: Be-because he won't listen to me!

Baloo: [humbled] I love that kid. Bagheera: Then think of what's best for Mowgli, and not yourself. Baloo: Well, can't I-- Well, can I wait until morning? Bagheera: It's morning now. Go on, Baloo.

Bagheera understands that it's really hard for him, but he urges him with a nod. Um, it's time to get up. Mowgli: [wakes up with a yawn] Oh, hi, Baloo. Baloo: Hi. Hey, rub that old sleep outta your eyes.

You and me We got a long walk ahead of us. Mowgli: [not really noticing that Baloo is now looking melancholy] Swell!

Gee we'll have lots of fun together! Baloo: [sadly] Sure, yeah. All right, let's hit the trail, kid. See you around, Bagheera. Mowgli: Well, good-bye Bagheera. Me and Baloo, we've got things to do. Bagheera: Goodbye, man-cub. Buzzy: Run, friend, run! Mowgli: Run? Why should I run? Shere Khan: Why should you run? Could it be possible that you don't know who I am? Mowgli: I know you all right.

You're Shere Khan. Shere Khan: Precisely! And you should also know that everyone runs from Shere Khan. Mowgli: You don't scare me! I won't run from anyone! Shere Khan: Ah, you have spirit for one so small. And such spirit is deserving of a sporting chance. Now then, I'm going to close my eyes and count to ten. It makes the chase more interesting Buzzy: [yawns] Hey, Flaps. What we gonna do? Flaps: I dunno. Whatcha wanna do? Ziggy: I've got it! Let's flap over to the east side of the jungle.

They've always got a bit of action, a bit of a swingin' scene, all right!We get a sampling of two of the submissions: a new motion capture technique that was used for the effects in Frozen, and then a new look for computer animated films, which was used for the award winning short Paperman anybody else find it odd that in the last few years Disney themselves has been far more innovative and interesting than Pixar in computer animation? Kaa: Certainly not. Write music. Hathi: [laughs] Shere Khan?!

The family lives in a pack , which is controlled by law of the jungle - only the tip pack , decide whether Mowgli live among the beasts , or give it to Shere Khan. Now sir, if you don't mind, we'd like to get on with the march.